- Same-Gender marriage is now enabled. Marry each other just like normal no matter what your two genders are in the squad.

- Added NEW Eye Codes. (The codes are set to be same as on all known servers for a comfortable adaptation of already created Inis/presets in the past)

Note: Click on this link for the eye codes:

- Added NEW face textures. (The codes are set to be the same on all known servers for a comfortable adaptation of the already created inis/ presets in the past)

Note: Click on this link for the face codes:

- Removed the fashion from Event Boutique.

- Changed Armageddon. Now it deals half of damage.

- DPH Dominator’s Maul (Sage and Demon) requirement was changed from 300 STR to 550 STR.

- Added +10 ATTACK Level to APS BM Blessing. (Use your old blessing to forge the new one)

Note: Your old Blessings are turned into molds. Use the mold in order to re-craft a fresh NUKE Blessubg at ''Patch Compensation'' Forge.

2. All of these tasks can be repeated as long as you are in there.

3. Killing 15 People will reward you with certain items. (Droppable upon death)

4. Killing 30 People will reward you with another x15 kills quest reward as well as a bigger x30 kills reward, but be careful! If you die before you get 30 kills you lose it all!

5. Killing 60 People without dying will reward you with 75 Event Gold and is even more impossible. Can you do it?

- All weapons can now be honed at the “Rerolling/Hone” forges for your respective paths.

Note: Click on this link for World Boss locations and drop information: 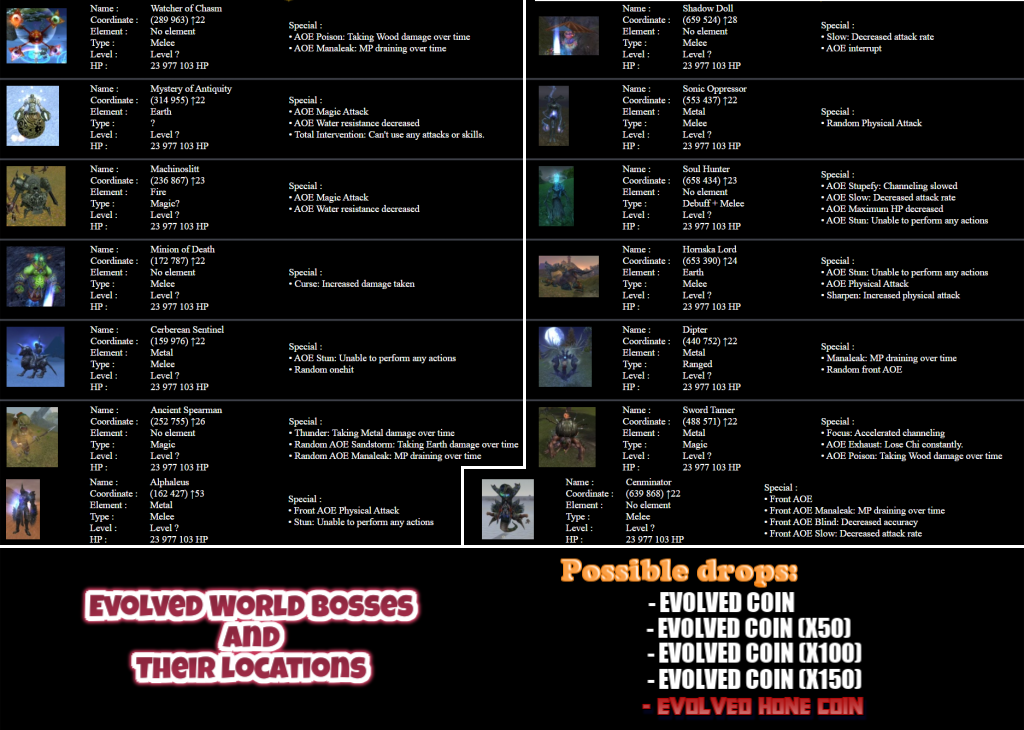 - Changed Pets Leveling template to instantly get to Level 150.

- The skill “Demon Moon Chant” description was changed, as we do not intend for the skill to give you 15 Atk Lvs for this buff.

- “Claws of the Archer” were added to the Re-shape Forge and can now be reshaped.

- “Spirit of the Forge” rerolling was added to the weapons of all path types as well as ornaments. Try out the new system ingame!

REMINDER: Skill Sender is in your folder: Evolvedpw153/element/Skill Sender

Users browsing this forum: No registered users and 1 guest